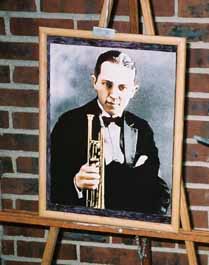 A Brief History of the Bix Vigils.

The first Bix Vigil, a gathering of Bixophiles in front of 43-30 46th Street, Sunnyside, Queens, NY, Bixs last place of residence, took place on August 6, 1999, the 68th anniversary of Bixs death. Mike Heckman and I were the organizers. A total of six people stood in front of the building from about 7 pm until 9:30 pm, talking and playing Bixs music. At 9:30 pm, the exact time that the death certificate gives as the time of Bixs death, Mike said a few words and we played take 2 of Ill Be A Friend With Pleasure,  a recording waxed by Bix Beiderbecke and His Orchestra on September 8, 1930. We discussed the possibility of placing a plaque in front of the building in memory of Bix. The block of 46th Street where 43-30 is located is rather nice. There are a number of apartment buildings that are kept in excellent condition. The street is lined with small trees and the building adjacent to Bixs apartment is a church with a lovely courtyard.

The next year only two people showed up for the vigil, and by 9:30 pm I was the only one left in front of the apartment building. I played Ill Be A Friend With Pleasure and thought about Bix and about the innumerable hours of pleasure Bixs music had given to countless of Bixophiles around the world. But, clearly, the Vigil was a failure.

Early in the year 2001, Paul Maringelli got in touch with me. Paul lives across the street from the building where Bix died. Although Paul is interested in jazz he plays drums- he had no idea that Bix, the jazz genius from Davenport, Iowa, had lived and died in the building across the street.  Paul had heard from Chris Beiderbecke, Bixs grandnephew, that I had organized a couple of vigils.  Paul obtained some help from local civic organizations and permission to use the courtyard of the All Saints Episcopal Church of Sunnyside, located right next to the apartment building where Bix died. The 2001 Vigil was a success, as was the 2002 Vigil. About 30 people attended each year. Paul independently had the idea of placing a plaque on the building in memory of Bix. We agreed that 2003, the year of Bixs 100th birthday, was the appropriate time to commemorate the memory of Bix with a plaque.

The 2003 Bix Vigil. The Unveiling of the Plaque. 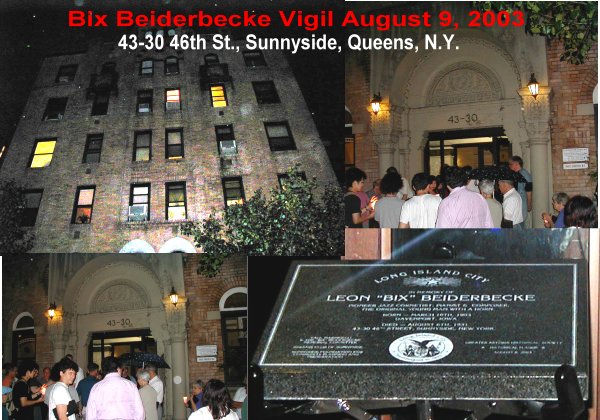 The latest Bix Vigil in Sunnyside, NY was most successful. On August 6, 2000, only two persons attended the Vigil. On August 9, 2003 there were nearly 100 people! All this success must be attributed to the excellent organization abilities of Paul Maringelli and to his dynamism. The audience was made up of people from the neighborhood, individuals associated with various civic and political organizations and Bixophiles,  some coming from as far away as New Jersey, upstate New York and Eastern Long Island.

The official hours were 7 to 9:30 pm. However, already by 6:30 pm people started drifting into the church courtyard adjacent to 43-60 46th Street, the apartment building where Bix spent the last few weeks of his life. The side of the apartment building can be seen from anywhere in the courtyard. This includes the windows in the corridor that leads to the apartment which Bix occupied for those few weeks. As soon as the public address system was set up, Bixs records were played. The first was The Jazz Me Blues and was followed by At the Jazz Band Ball.  I found it quite emotional to listen to Bixs extraordinary cornet sound, look at the windows of the corridor that Bix must have walked so many times, and thinking of Bix, in poor health, slowly waning, alone.

By 7 pm a large crowd had gathered (nearly 70 people) and Paul opened the proceedings. A series of short speeches were made by several representatives of organizations and individuals who supported the event, Father Joseph of the All Saints Episcopal Church of Sunnyside, The Kiwanis Club of Sunnyside, a member of the staff of Assemblywoman Catherine Nolan, Bob Singleton of the Greater Astoria Historical Society, and Councilman Eric Gioia. As time went by, more and more people came in and by 7:15, I estimate that the audience was close to 100 people strong. 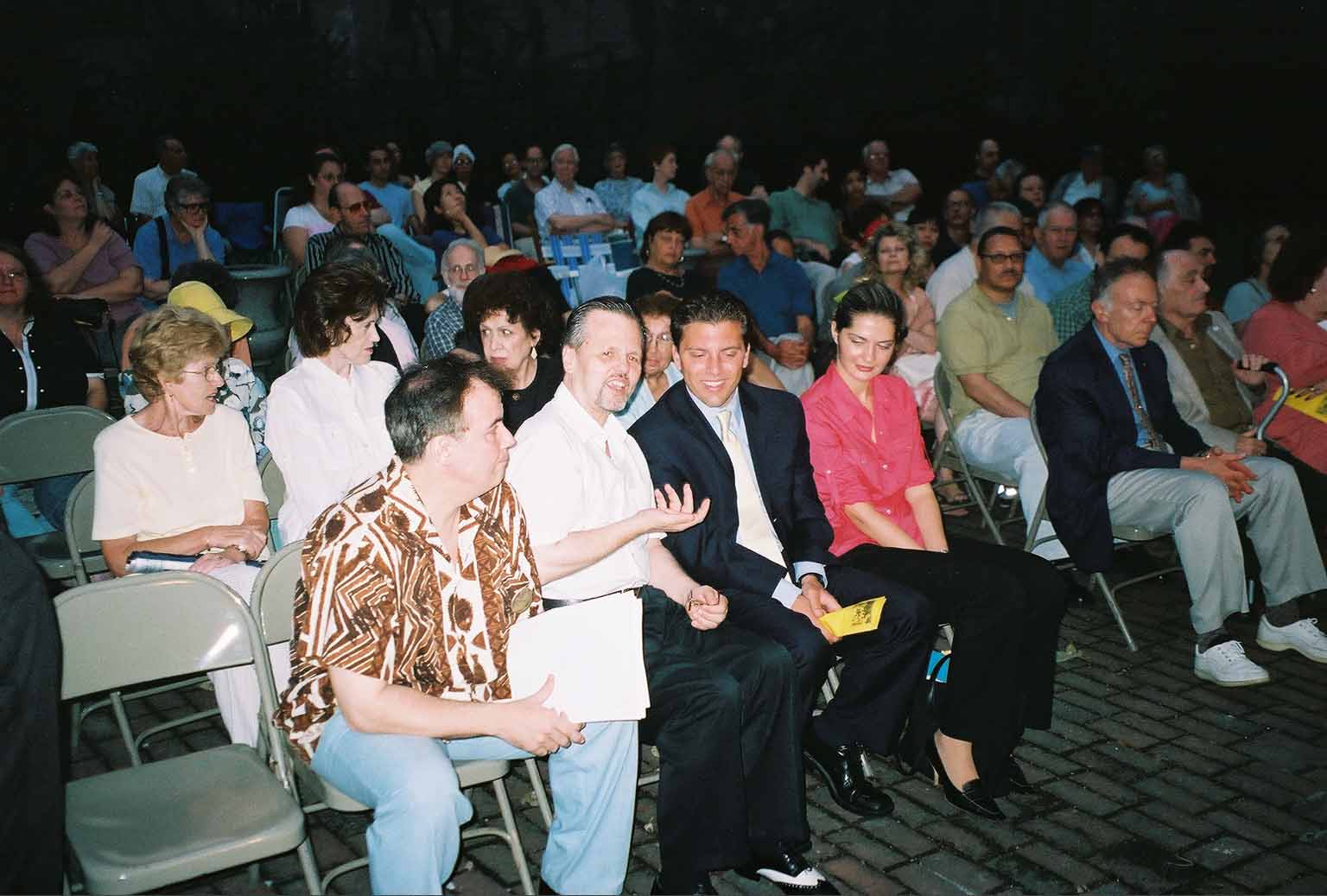 At that point, Paul introduced the keynote speaker, Martin McQuade, Video and Music Archivist, Film Historian, and Bing Crosby specialist. The theme of his address was the relation between Bing and Bix. Martin read several excerpts of Bings comments about Bix. Perhaps the most interesting of the readings was a statement by Bing in which he declares that he tried to sing like Bix played cornet. Martin then played and commented about five of the Paul Whiteman recordings that Bix and Bing made together, Changes, From Monday On, You Took Advantage of Me, Oh, Miss Hannah, and Waiting At the End of the Road. An excellent selection of Bix n Bing.

Paul then called me to the microphone and I started by providing a short account of the Bix vigils, beginning in 1999 as a small gathering organized by Mike Heckman and I- of fans outside of Bixs apartment building. I followed with some remarks about the worldwide importance of Bix by mentioning the Ascona Jazz Festival in Switzerland [the title of the festival for 2003 was Bixology] and the Bix Beiderbecke Memorial Jazz Festival in Davenport last July. Both of these festivals were attended by over 10,000 people. I briefly mentioned the fact that Bix had been inducted in the International Jazz Hall of Fame in 1997 and that two of Bixs recordings Singin the Blues and In A Mist- had received Grammy Hall of Fame Awards in 1977 and 1980, respectively. Finally, I mentioned that the house where Bix was born, 1924 Grand Avenue, Davenport, Iowa was entered in the National Register of Historic Places in 1977. 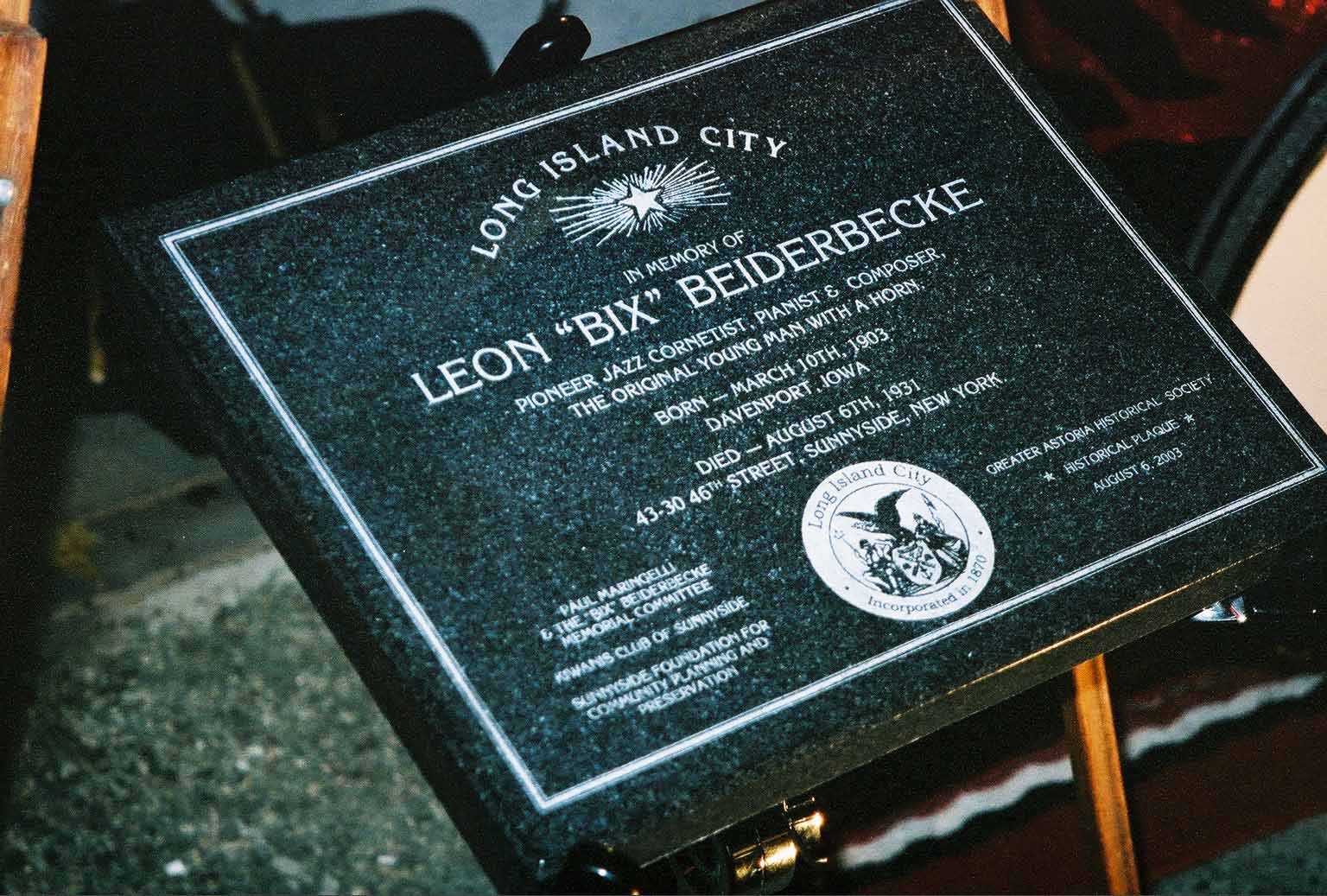 selections such as My Blue Heaven, Blue Skies, Back Home in Indiana, etc. At about 8:30 pm, Paul unveiled the commemorative plaque that had been placed on a stand. It is a magnificent object to be mounted on the front wall of the building at 43-60 46th Street, Bixs last place of residence. The text was suggested by Mike Heckman.

At 8:45 pm, the band stopped playing and the audience moved from the courtyard to the front of Bixs 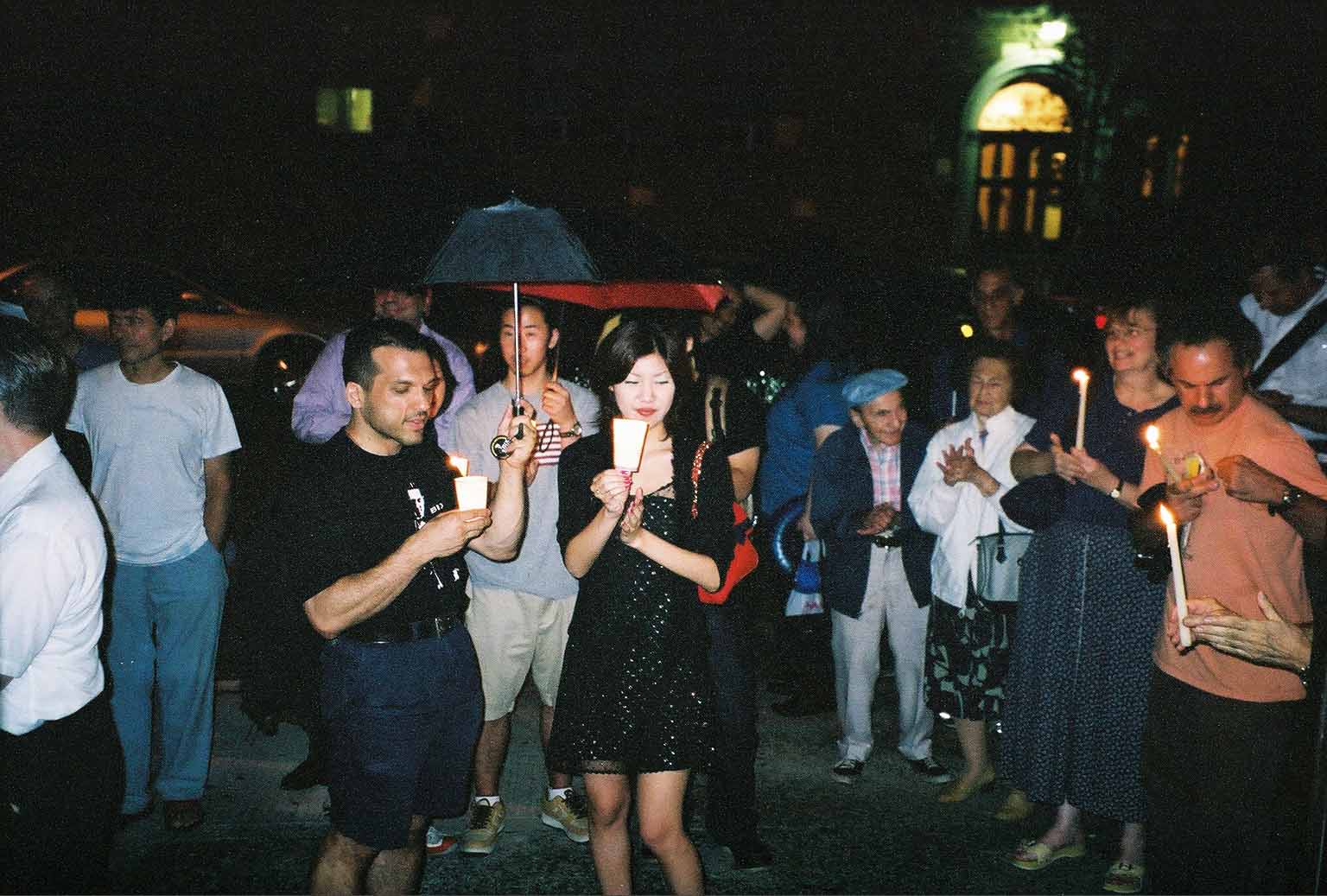 apartment building. Candles were lit and Bixs recording of Ill Be A Friend With Pleasure was played. A simple, yet effective way of remembering Bix, who had died 72 years ago in the building; a fitting homage to a modest genius.

I am indebted to Steve Gallagher for the montage and to Paul Maringelli for the remaining images.


Addendum, November 8, 2003.
The plaque was placed on the wall of 43-30 Bliss St. on September 26, 2003. Here are some photographs taken during the installation of the plaque. I am grateful to Paul Maringelli for sending me scans of the photos.
1. General View. 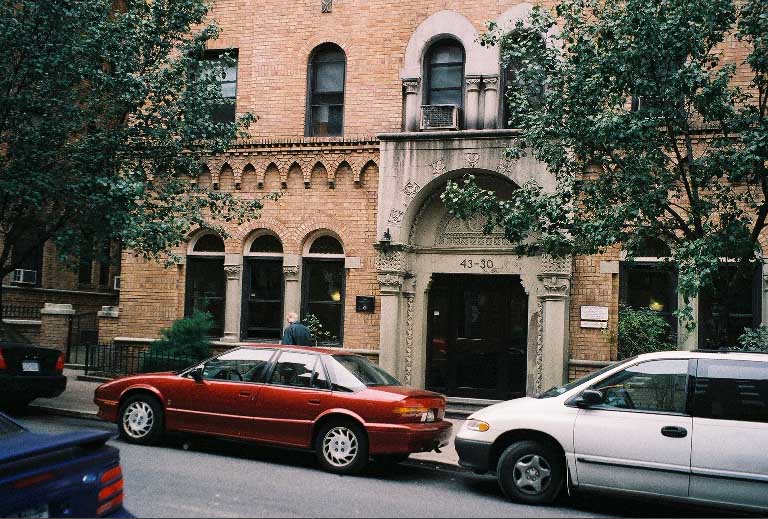 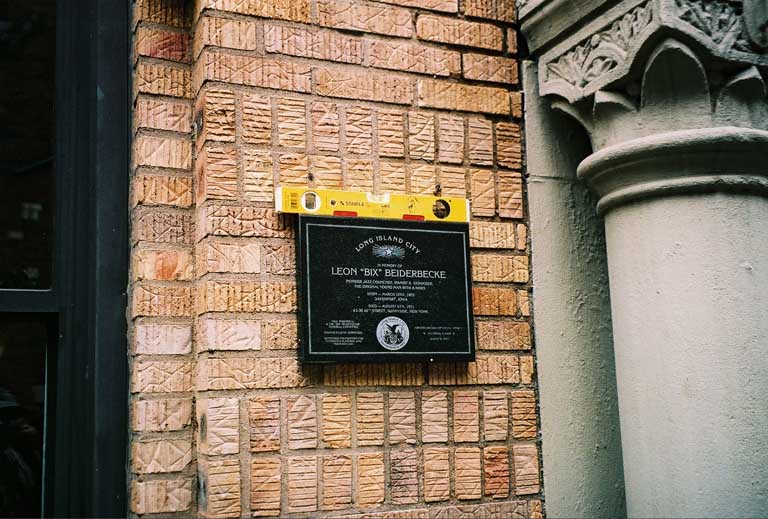 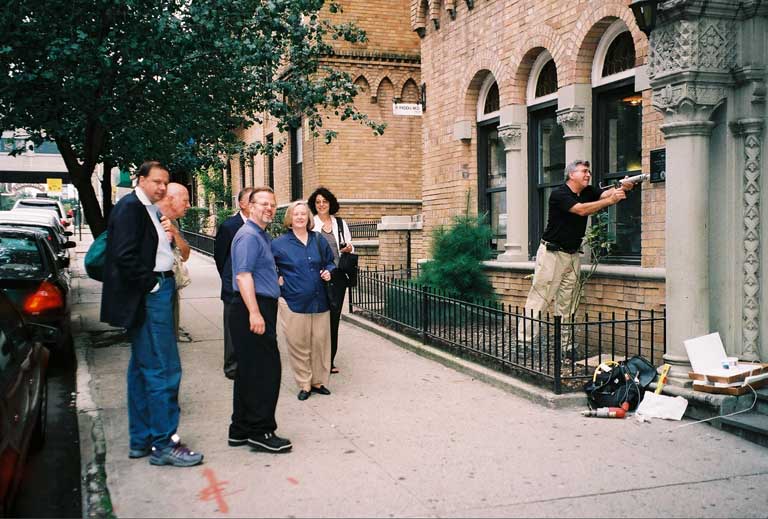 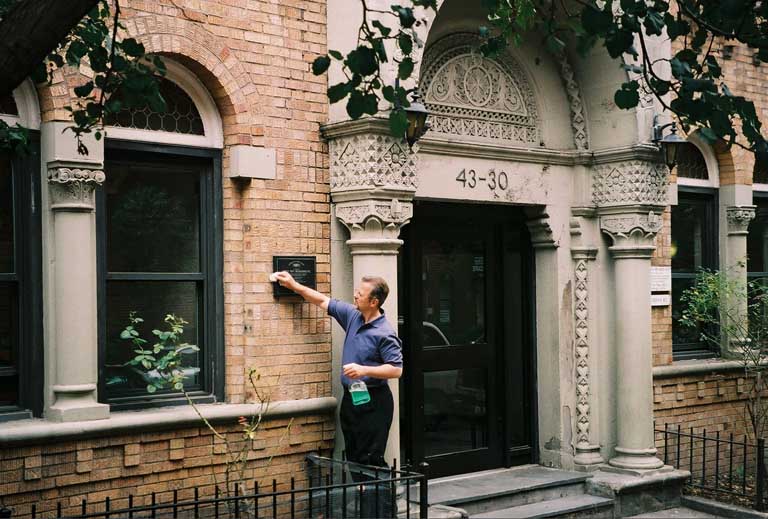 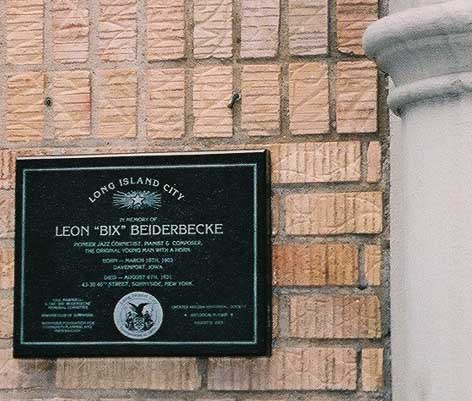